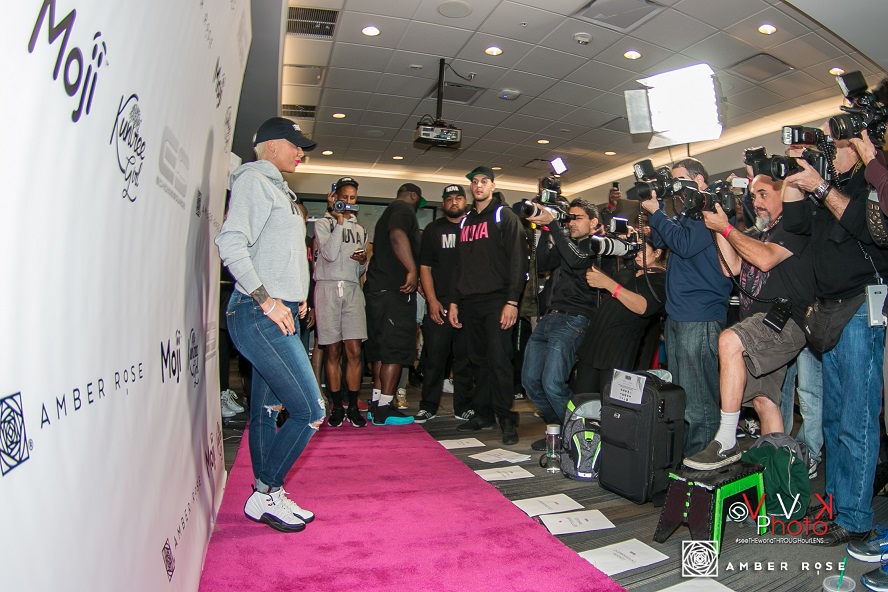 Posted at 21:31h in Entertainment by wirepress 0 Comments

HOLLYWOOD, CA (THE WIRE PRESS) – Pop culture icon and social media fan favorite, Amber Rose, expands her stake in the tech world with the unveiling of her new “MUVA MOJI” icons, created by Moji, the worldwide leader of emoji. Amber celebrated the release of over 900 new customized #MUVAMOJI icons at an exclusive red carpet bash in Hollywood.

Guest in attendance were the first to view Amber’s exclusive new collection of MUVA MOJI icons, and also enjoyed delicious appetizers and the evening’s soundtrack curated by Miss DJ Bliss and DJ Duffey.

“I’m so excited to finally launch my own emoji app! After months and months of work it’s finally ready for the world to see,” says Amber Rose. “I wanted to include enough content to appeal to everyone; not just my fans. The Moji team and I have come up with over 900 icons we are initially launching with and plan to update it regularly by adding more content each week.”

Oliver Camilo, Founder & CEO of Moji, says, “This is the year of the emoji and Amber Rose is the perfect fit for our brand. We’ve been working on this exciting collection for the past six months. Unlike some other popular emoji’s out there, Amber’s emojis are less about her per se, and more relevant to her massive fan base. With Amber, we can go in depth and really develop each icon so they’re applicable in each users every day messaging,” says Camilo. “Amber was extremely involved and hands on with the creation process. We believe her collection will be very well received. This is just the beginning…we’re working with Amber on some other exciting projects we’ll be rolling out in the emoji space soon.”

Since its inception last year, Moji has created over 13,000 icons and has quickly emerged as the leading app for custom emoji designs and collections, collaborating with a myriad of celebrities including Future, The Game, DJ Snake, Fetty Wap, Fabolous, Pia Mia, G-Eazy and many more. “It goes beyond just putting someone’s face or brand on a keyboard. We are in tune with the pulse of pop culture and can instantly create relevant content in real time. The products you see are just the tip of the iceberg. We have a lot more creative projects we’ll unveil this year,” notes Camilo.

Amber Rose continues to expand her “MUVA” empire in the social media, fashion and tech industries while making headlines as the outspoken leader of her own women’s empowerment movement.

About Amber Rose
Amber Rose is a proud mother, philanthropist, entrepreneur, spokesperson and published author from Philadelphia, Pennsylvania. MUVA has affectionately become known as the face of neo-feminism. Ms. Rose’s rise to massive popularity is now largely attributed to her controversial yet impactful perspective on women’s issues. At the core of the Amber Rose brand is her non-profit, the Amber Rose Foundation, dedicated to female empowerment and equality. Last year, Rose rallied her massive social media following to help produce the largest “SlutWalk” in the world. In addition to her philanthropic efforts, Rose has an extensive entrepreneurial profile, which includes acting, producing film and television, modeling, an active public speaking and touring schedule, an eyewear and clothing line and her top-selling book and #1 audiobook, “How to Be a Bad Bitch.” Visit http://www.muvarose.com for more info.

About Moji
Moji is the “App Store” of emoji. Download over 10,000 celebrity, trending & meme icons and manage them all in one keyboard. Updated daily. Exclusively for iOS. The Moji app provides a definitive place to access over 15,000 original designs instead of having to download multiple apps to get the emoji you want. With new content added daily, we are the worldwide leader of emoji. A full service agency, we handle all aspects of emoji design, publishing and analytics. We can turn anything into an emoji, distribute it on the #1 worldwide emoji platform and provide you with insight on sales, trends and engagement. Learn more at http://www.wemakemoji.com.